Get to know the basic facts and countries in South America. Also, learn about Sandalsand’s impressions, find photos and articles.

I was strolling around the Plaza de Armas in Cuzco, Peru. Then three smiling girls came up with their alpacas and traditional clothing. Of course I had to stop and take their picture.

The girls did not ask for propina, instead they were just nice and laughed when they took up position in front of us. Obviously, we could not resist the temptation to photograph them.

For a traveller, the Inca descendants from the Andes Mountain Range represent the quintessence of this part of the world. They are a poor, yet proud. They are traditional, yet they strive to enhance their material well-being. Unfortunately most South American countries have been ruled by military dictatorships. Throughout the centuries the military has been cooperating closely with the Catholic church.

In combination with immense differences between rich and poor, most countries have had profound difficulties to develop a sound economy. That is an economy able to produce a decent standard of living for all segments of the population. On the other hand, very positive trends have emerged since the end of the 20th century.

All this goes for the rest of Latin America as well. By the way, Sandalsand categorises everything north of the South American (sub-) continent as North America.

South America consists of 12 independent countries and Sandalsand has been to six. If you click the country links above, you will find all entries from each country.

I have not been to Argentina, Guyana, Paraguay, Suriname, Uruguay, or Venezuela. They are indicated by a yellow colour in the map.

There are also a few territories of a different legal status in this region, for instance the Falkland Islands and South Georgia. They are British overseas territories. French Guiana is a French overseas region. It is normal to group Central America and the Caribbean as part of North America, and I follow the same definition.

Map of South America. Sandalsand has been to countries marked with a green colour, and not the yellow countries. (Map source: Wikimedia Commons, Creative Commons Attribution 3.0 Unported license (user Luan))

Open the box to view Sandalsand’s picture galleries from this region.

This is a collection of Sandalsand's pictures from Chile. They cover the country from north to south almost the entire length. If you look up all...

Impressions from more than a month in Chile

Finally in this diary from Chile I will, as before, try to write down a few summarising views and impressions from what we experienced during our 43...

Towns and places in the central parts of Chile

Back to Santiago, Valdivia and Valparaíso in the central parts of Chile for the last two weeks before the long way home from South America. This...

The important port city of Valparaíso on the Chilean coast offers some nice funicular rides up the steep hillsides. The UNESCO World Heritage List...

In Latin America, even atheists are Catholics. (Carlos Fuentes)

This is from Wikipedia’s introduction to this region. 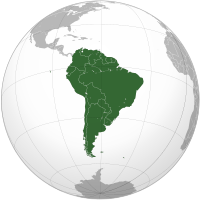 It is bordered on the west by the Pacific Ocean and on the north and east by the Atlantic Ocean; North America and the Caribbean Sea lie to the northwest.

South America has an area of 17,840,000 square kilometers (6,890,000 sq mi). Its population as of 2016 has been estimated at more than 420 million. South America ranks fourth in area (after Asia, Africa, and North America) and fifth in population (after Asia, Africa, Europe, and North America). Brazil is by far the most populous South American country, with more than half of the continent’s population, followed by Colombia, Argentina, Venezuela and Peru. In recent decades Brazil has also concentrated half of the region’s GDP and has become a first regional power.

Sandalsand use cookies to give you the most relevant experience by remembering your preferences and repeat visits. By clicking “Accept All”, you consent to the use of ALL the cookies. However, you may visit "Cookie Settings" to provide a controlled consent. Read More
Cookie SettingsAccept All
Manage consent