I took this photo in Lucca, Italy. We were touring several Tuscan cities and entered through the high and thick city wall of Lucca. Here we found an antiques market spread around in what seemed like the entire city centre.

We were astonished and very tempted to buy whatever we could. Unfortunately, our means of transportation rendered that temptation unfeasible.

My definition of Southern Europe are the countries adjacent to the Mediterranean Sea and on the west coast of the Black Sea. Give or take a few for practical purposes. (Portugal borders the Atlantic.)

Let us go to Madrid and a heritage site with a very long name; Paseo del Prado and Buen Retiro, a landscape of Arts and Sciences. The UNESCO World...

We had come to Florence to discover one of Europe's most historic, enticing and perhaps most touristy cities. This article is the last in a series...

This is a collection of pictures from Italy, the result of trips to different parts of the country over many years. Find all Italy entries on this...

Tuscany is full of picturesque old cities awaiting to be explored - and tourists are not hesitant to do so. The Historic Centre of the City of...

What is the essence of Tuscany? See if you can find an answer in this article from a road trip in the region. It starts in Cortona, stops at Pienza,...

We were on a road trip in central Italy. A string of very tempting cities were coming up in Umbria and Toscana (Tuscany) and we were eager to spend...

This is a list of 10 European city breaks. City breaks or city escapes have become increasingly popular and there are many possible destinations. If...

This is a collection of pictures from Cyprus, north and south. They are the result of a trip in 2014 to the coast and inland. Find all Cyprus...

Famagusta and Salamis in Northern Cyprus

We had decided to pay a visit to northern Cyprus. Thanks to the war 40 years ago that objective is not an easy one to accomplish. We went on a day...

A day trip into the Troodos mountains of Cyprus

The Troodos mountains offer a fine alternative or addition to your ordinary beach vacation in Cyprus. We were hunting nice scenery, traditional... 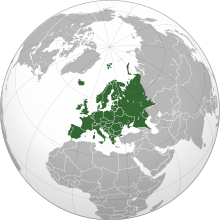 The Age of Enlightenment, the subsequent French Revolution and the Napoleonic Wars shaped the continent culturally, politically and economically from the end of the 17th century till the first half of the 19th century. The Industrial Revolution gave rise to radical economic, cultural and social change in Western Europe and eventually the wider world. Both world wars took place for the most part in Europe, contributing to a decline in Western European dominance in world affairs by the mid-20th century as the Soviet Union and the United States took prominence. During the Cold War, Europe was divided along the Iron Curtain between NATO in the West and the Warsaw Pact in the East, until the revolutions of 1989 and fall of the Berlin Wall.