There are many varieties of rail transport; metro, cable car, cog track and tram to mention some. There are actually a lot more than you think of, and that is what I discovered drafting this article.

This article is trying to distinguish “ordinary” trains from “other” trains. A selection of ordinary train journeys were described in the first article of this mini-series.

Rapid Transit systems are running under the names of subway, tube, or metro. They may run underground in tunnels, hence the names of subway or tube. When the lines branch off into the suburbs they may move up into daylight as well. Metros provide swift, efficient mass transportation in metropolitan areas.

In my years of travelling I can think of these cities where I have been riding a metro train: Barcelona, Beijing, Berlin, Budapest, Hong Kong, Kyiv, Kyoto, Lisbon, London, Madrid, Milan, Minsk, Montreal, Moscow, New York, Oslo, Paris, Pyongyang, Prague, Santiago, Seoul, Stockholm, Tokyo and Vienna (including additions after this article was first published). They are obviously very different from one another, but in my overall opinion two systems distinguish from the rest. One is the Moscow Metro due to its beautiful stations and the other is Paris, perhaps because I like their signposts. The featured image above is from the Molodyozhnaya metro station in Minsk.

Funiculars are great for tourists and locals alike. Come to think of it, I have actually been riding quite a few. Hong Kong ‘s Peak Tram and the Fløibanen in Bergen, Norway are two. Valparaiso in Chile has a whole lot of them. Then we have the fascinating Elevador de Glória in Lisbon (which is more like an elevator), the Castle Hill funicular going up from the Danube river to the Buda Castle in Budapest. I believe I skipped the one at Montmartre the times I have been to Paris. After this article was initially published I made sure to ride the funicular on my visits to Vilnius, Quebec City, and Kyiv.

The funicular rails up the Victoria Peak in Hong Kong

The Pilatus mountain in Switzerland has the world’s steepest cog railway. There are not many of them left in the world. The two rails are supplemented by a rack rail in between. One or more cog wheels or pinions mesh with the rack rail. This allows the train to move up quite steep mountain sides in a rather slow speed.

The Pilatus train was not very comfortable but it was fascinating and the view was great. This train, as well as funicular trains, are fascinating in the respect that they are built-to-fit the gradient. We sit horizontally as we normally would on a train, but the bogey set is tilted to align with the gradient of the hill.

Window view up the cog railway of Pilatus mountain, Switzerland

Trams are traditional modes of rail transportation in urban locations. Most of them use electrical power supplied from an overhead pantograph. They are found in a great variety in many cities throughout the world. My own experiences are from Beijing, Bergen, Budapest, Xian, Helsinki, Hong Kong, Lisbon, Milan, Oslo, Prague, Vienna, and maybe more. (I have seen the ones in Berne, but I did not take it.)

A trolleybus is a bit different from a tram as it follows an overhead power line, but is not fixed to rails in the ground. A cable car does run on rails but is drawn by a cable running at constant speed, somewhat similar to a funicular. There are very few trolleybuses and even fewer cable cars in operation anymore.

In underground (mountain) mining one needs to move the excavated produce out of the mine, and workers in and out. What is then better than laying a set of rails? Well, I once had the pleasure of riding the workers’ transport train, locked up inside a dark, extremely noisy and cold “prison cell”, down a narrow gauged line into the now abandoned royal silver mine of Kongsberg, Norway.

The train into the Kongsberg silver mines, Norway

These trains, pulled by locomotives running on charcoal generated steam rather than diesel or electricity, do not have to be special in the sense they run on other tracks than ordinary trains. However, I would believe most steam engines now run on separate tracks for the pleasure of tourists and a dedicated group of fans operating the line.

The Harry Potter train has revived the notion of travelling on a steam train, especially the famous scene of the Glenfinnan viaduct in Scotland. I have yet to go there but have been to the station in Goathland, also pictured in the Potter movies. In Norway there is a nice little steam train called Tertitten, inserted below.

I have not much to say about them except that they are eventually taking the world by storm speed. My experience is, however, very limited. Shinkansen in Japan, and the TGV in France are the only ones I have tried. The former had a good standard, but stopped at every little station on the line, when I took it.

What do you do when your railway line hits a river or the sea, and you need to cross it? One option is to design a ferry with rails on the deck. The train simply drives onto the ferry. I have taken one train ferry still in operation (Rødby (Denmark) to Puttgarten (Germany) and two lines which have been discontinued: Malmo (Sweden) to Sassnitz (Germany) and Helsingborg (Sweden) to Helsingør (Denmark). This was years ago and I only remember it was a noisy operation. There was a sense of freedom of actually being able to stay in our cabins – unlike on many car ferries.

Automated transport over short distances is presumably going to be more common. My only experience is from Beijing Airport. These are automatic trains without drivers.

There is a lot more to write about when it comes to “Iron Wheels”, railways, railroads, trains and so on. In order to avoid boring the reader I will stop here.

Let me just draw your attention to one more aspect, track width. You may want to read what happened to us on the border between Mongolia and China. The train set was lifted up, and the bogies were replaced as we sat in the cars and followed the process for three hours. Why: China has a different track gauge (1435 mm) than Mongolia and Russia (1520 mm).

I have previously blogged about Great Travel Songs. Some songs on that list are about trains. A lot more songs are found on this link and one more.

Here are a few pictures tagged metro, trams or funicular. 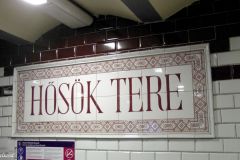 Take me there
Sandalsand use cookies to give you the most relevant experience by remembering your preferences and repeat visits. By clicking “Accept All”, you consent to the use of ALL the cookies. However, you may visit "Cookie Settings" to provide a controlled consent. Read up on privacy
Cookie SettingsAccept All
Manage consent