The city of Paro, Bhutan

The valley of Paro is generally acknowledged as one of the most picturesque in the country. The competition is hard. There are also several cultural highlights to satisfy your wishes during the last days of your Bhutan visit.

This was to become the longest road trip in Bhutan, from Phobjikha Valley near the middle of the country, to Paro in the west. It is a distance of merely 180 km, but due to the road conditions it took us nearly 10 hours. Anyway, the scenery is beautiful and the views are great, at times slightly scary on the slippery dirt roads high up on the mountainsides.

When we had passed Thimphu, the capital, and set course for Paro with Bhutan’s sole international airport, road conditions improved. This stretch is dotted with funny signs, seriously intended. The road signs offered several kinds of advice on how to behave on roads, a couple of which are included below. 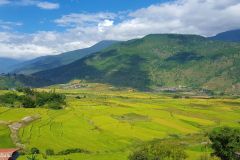 Things to see in Paro

Ta Dzong and the National Museum

Basically Paro is the place where you arrive in and depart from Bhutan, and the starting point for visits to Taktsang Lhakhang, better known as The Tiger’s Nest. Foreigners are most often guided up that mountain at the end of their visit to Bhutan, spending their first days elsewhere to get acclimatised to the altitude. I arrived in the early evening and there was not really much to do but eat and taking an early night. The next day started very early to get ahead of the crowd eager to climb this famous mountain. The hike was presented in the previous chapter from Bhutan.

Paro itself is rich in history. The valley is long and wide, and is one of the most fertile parts of Bhutan. The views are great so aim for a good lookout point or two. One such place is the ancient watchtower by the name of Ta Dzong. It is now the National Museum of Bhutan. At the time of my visit, the exhibitions had moved into a new building next to it. The museum offers a good introduction to Bhutan’s nature and culture. The people behind the museum may however want to seek out advice from people abroad – there is a way to go in improving the museum’s attractiveness.

Further down the hill we found the very impressive Rinpung fortress-monastery (dzong), or simply Paro dzong. Paro has always been an important place, and the first monastery was built as early as the 10th century. The fortifications took place in the 17th century to defend the valley against raiding Tibetan armies.

This was my fourth dzong visit in Bhutan and I had by far got tired of them. This one is basically the same type, same architecture, but still different. In any case, it is extremely fascinating to be walking around in the temples and the courtyards looking for new angles to take pictures from. There is a famous bridge spanning the river below the monastery.

The centre of Paro is actually quite new, in the sense that the streets have been laid out in a square pattern only a few decades ago. Due to government regulations on how to build houses in Bhutan, residential houses and shops all have the basic, traditional appearance. I enjoyed walking the streets taking in the atmosphere and at some point I got a kick. I am usually not a shopping type of person, but I decided to buy a traditional man’s costume.

Finding the right pattern went well, putting it on proved difficult. Back home I had to seek up YouTube videos to get it right. I have since adorned my body with it only a few times, but found good use of it. It now hangs on the wall, and looks quite alright actually.

That evening, after having hiked to the Tiger’s Nest, I gladly accepted the offer to take a hot stone bath. It was a wonderful thing to do. A wooden tub was filled with water, heated by red-hot stones dumped into the foot end of the tub, outside the wall of the building. Finishing off the evening with strong drinks, Bhutanese style, and a folklore show, made this a perfect day.

The next morning I was off for Nepal.

Leaving Bhutan. Aerial view on my way out of Paro. The views later on, flying along the Himalayan mountain range to Kathmandu were even better.

The map below shows the places I visited and the roads I travelled during my week in Bhutan. You may expand the map into another tab or window, or zoom in and out here and now.

This series from Bhutan consists of the following chapters:

PICS – Bhutan (all images from the country in one place)

This article is the fifth from my visit to Bhutan. I flew in from Bangkok, spent seven days in Bhutan and then took a flight to Nepal for another week. The overall schedule is introduced in an article called The outline of a visit to the Himalayas.

Take me there
Sandalsand use cookies to give you the most relevant experience by remembering your preferences and repeat visits. By clicking “Accept All”, you consent to the use of ALL the cookies. However, you may visit "Cookie Settings" to provide a controlled consent. Read up on privacy
Cookie SettingsAccept All
Manage consent