This Week in Nature: 8 Dramatic Cliffs

Steep mountain slopes hitting the waves on a coastline are always dramatic, especially in rough weather.

This post is part of a series portraying the classic Elements of Nature: Earth, Fire, Water, Air. Cliffs are examples of the first element, Earth.

2. Okinawa, Japan. Okinawa’s coastal cliffs are dramatic in their own right, but the Allied invasion of 1945 adds layers of drama to them.

My favourites are however not among the above two landscapes. Apart from their historical significance, there are more visually dramatic cliffs elsewhere. Here is a European selection of six favourites.

I am particularly fond of cliffs that end in the sea.

3. Cliffs of Moher, Ireland. We start in the far west, on the windblown coast of County Clair. There is a path leading on top of the cliff face, not many metres from the certain death. Here and there we find a watchtower or another building showing the way. No one would have the fantasy to imagine and create this kind of scenery – nature did.

Cliffs of Moher with O’Brien’s Tower

4. Madeira, Portugal. We have now moved to the far south of Europe, to Portugal. To be more accurate we are on the island of Madeira outside of West Africa. This green, lush island have some really intense cliffs plunging almost vertically into the Atlantic Ocean.

Madeira, not far from the town of Seixal

5. The Rock, Gibraltar. This is undoubtedly one of the most famous cliffs in the world. Many wars have been fought over the control of it, and many legends have been spurned – like the one about Hercules. It is today the cause of constant dispute between the United Kingdom and Spain. Gibraltar is formally a British Overseas Territory.

6. Bonifacio, Corsica. Further inside the Mediterranean Ocean there are quite a few islands. Corsica is one of the largest. There are beautiful sandy beaches many places on the island, and in the very south some dramatic cliffs. The town of Bonifacio sits on top of a cliff with amazing views south to Sardinia.

Cliffs on the south coast of Corsica, seen from Bonifacio

7. Santorini, Greece. Here is another favourite. In the Aegaen Sea, part of the Mediterranean, the Greek island of Santorini (Thira) was originally a volcano which exploded some 3,600 years ago. What we today encounter is the caldera (rim) of the volcano. The main city on the island, Fira, enjoys a magnificent location right on top of the caldera.

The city of Fira on the volcanic island of Santorini

From the south of Europe we move fast north to Norway and a breathtaking view of a fjord.

8. The Pulpit Rock, Norway. This mountain cliff is considered by some to be the most breathtaking view point anywhere on Mother Earth. Walk out onto the Pulpit and look 600 metres down on the fjord.

This place may also serve as an excellent introduction to the next article in this series.

Missing anything? For sure, I’ve had to skip some of my images related to this subject and refrained from mentioning some of my visits. Feel free to search this website for more. In addition, you are surely missing famous places or your own favourites. Chances are I haven’t been there, and I only include my own images and visits in this series.

All articles in this series 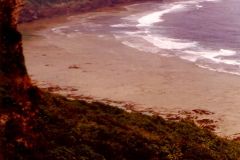 Manila and the first days in the northern Philippines